JOE PULICE
PERCUSSION
Joe holds a Bachelor of Science degree in Music Education and a Master of Music degree in Percussion from the University of Minnesota. As a jazz drummer and show player, he has been an active, in-demand drummer/percussionist in the Twin Cities since 1980. In 1979, Joe won The Northern Midwest Regional Louie Bellson/Slingerland Drum Contest. In 1986, he toured with Woody Herman and his Thundering Herd during Woody’s 50th Anniversary Tour. He has won two Minnesota Jazz Music Awards – one for Best Jazz Vibist and one as a member of world-renowned drummer Eric Kamau Gravatt’s group “Kamanari.” Joe has worked with such jazz greats as Stan Getz, Slide Hampton, David Liebman and Jack McDuff. As a show player, he has performed with many artists, including Ray Charles, Aretha Franklin and Harry Connick Jr. 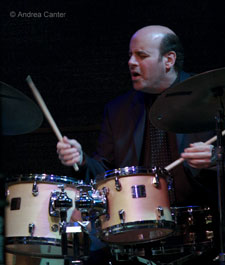