MICHAEL B. NELSON
TROMBONE
Michael has distinguished himself as leader, arranger and trombonist for the Hornheads, the a cappella jazz horn group. In addition to receiving the McKnight Composers Fellowship in 1996, he has composed and arranged for Prince and many international artists and has toured worldwide with Prince. His trombone credits include performances with Doc Severinsen, Chaka Khan, Lenny Kravitz, Ben Sidran, Sammy Davis Jr., Phil Upchurch and many others. He has also produced and arranged several Target Lifescapes Series jazz CDs. He studied at the Lawrence Conservatory of Music, Appleton WI, under the late Fred Sturm, former Director of Jazz Studies at the Eastman School of Music. He is also a member of the trombone ensemble Locally Damaging Winds. 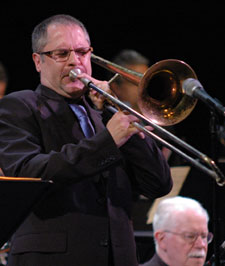